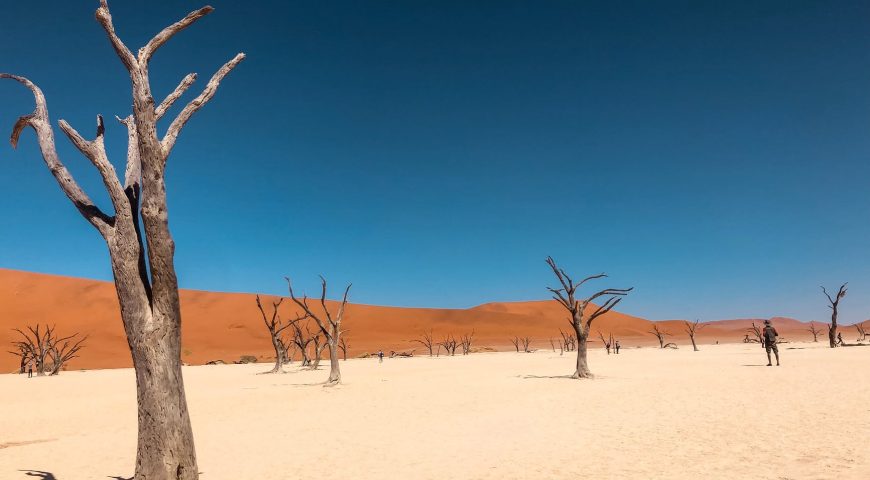 Sossusvlei, a large ephemeral pan, is set amid red sand dunes that tower up to 325m above the valley floor. It rarely contains any water, but when the Tsauchab River has gathered enough volume and momentum to push beyond the thirsty plains to the sand sea, it’s completely transformed. The normally cracked dry mud gives way to an ethereal blue-green lake, surrounded by greenery and attended by aquatic birdlife, as well as the usual sand-loving gemsboks, and ostriches

This sand probably originated in the Kalahari between three and five million years ago. It was washed down the Orange River and out to sea, where it was swept northward with the Benguela Current to be deposited along the coast. The best way to get the measure of this sandy sprawl is to climb a dune, as most people do. And of course, if you experience a sense of déjà vu here, don’t be surprised – Sossusvlei has appeared in many films and advertisements worldwide, and every story ever written about Namibia features a photo of it.

At the end of the 65km 2WD road from Sesriem is the 2WD car park; only 4WDs can drive the last 4km into the Sossusvlei Pan itself. Visitors with lesser vehicles park at the 2WD car park and walk, hitch or catch the shuttle to cover the remaining distance. If you choose to walk, allot about 90 minutes, and carry enough water for a hot, sandy slog in the sun.

One thought on “Sossusvlei, a Large Ephemeral Pan”